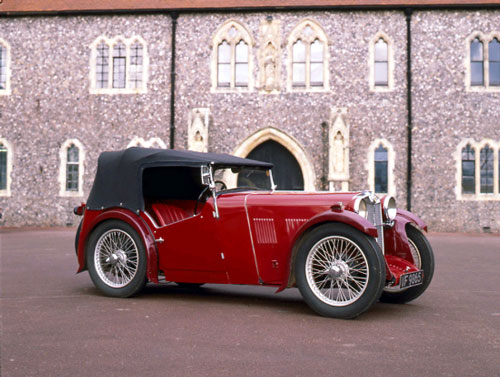 The J series of MG Midgets was to be a refinement of the C and D Type forerunners, announced in 1932 at the Motor Show a whole new series of cars made their debut. The J1 was offered with 4 seater open or closed bodywork and the J2 was strictly a two seater sports and the racing variants, the J3 and J4 although launched to the public, were not to go into production until early 1933. The J2 was very well received by the motoring public and was soon to become one of the classic sports cars of the era, it was within reach of many enthusiasts, sensibly priced at £199 10s it gave outstanding performance and value for money. The J1 was sold for £220 with a Salonette version at £255. The cars were based on the successful design of the C type or Montlhery Midget as it had become known, which was in itself a direct derivative of the M type Midget. The J1 was a pretty looking car and was a practical 4 seater sports returning reasonable performance from its race developed 847cc engine. This was based on the power unit used in the M type and was Wolseley derived.

Motor magazine gave extensive editorial to the new range of Midgets leading with a banner headline '80mph MG Midget for under £200'. This statement, although true, caused considerable embarrassment later on for Cecil Kimmber. He had instructed Reg Jackson, one of his top development engineers to ensure that all the press cars were capable of at least 80mph. This he duly did and reports in the press gave great prominence to this with S C H Davis of Autocar reporting that he had achieved 82mph on road test. Several days later the two main bearing crankshaft broke on this particular car and the factory had to lower the compression ratio for the start of the production run. The J2 was then dogged with complaints from owners bemoaning the fact that their cars would not perform as Autocar said they would!

The chassis layout of the J1 and J2 followed that of the C type incorporating virtually straight side members passing under the rear axle with tubular cross supports. The suspension was half elliptic all round with sliding trunnions. Cable operated brakes utilising 8" finned drum brakes were quite effective forthe size of car. The racing type hand brake lever was mounted on a shaft linked to the foot pedal and four cables which allowed easy adjustment of the brakes were linked into each wheel. Friction type Hartford shock absorbers were fitted front and rear with the latter being mounted transversely. The chassis was lubricated by a Tecalemit central greasing system with the grease nipples neatly grouped each side of the lower bulkhead wall. Other features of the J series included a twelve volt Rotax lighting and starting system fed from a vertically mounted dynamo. Rudge Whitworth centre lock wire wheels and Maries steering gear that was adjustable for rake completed the package.

The J1 and J2 set the fashion in MG cars for many years to come with the J2 displaying a classic humped scuttle and low cut away doors. The J1 was a little more sedate with a flatter topped scuttle incorporating a less sporting but nonetheless highly functional dashboard. This had an enclosed glovebox on the near side with a dummy one for symmetry on the off side on which was mounted the horn push and dip switch. The long bonnet seemed out of proportion with the rest of the car, but this concealed not only the engine and gearbox, but the foot controls and the legs of the driver and passenger as well! On lifting the bonnet is seemed odd to peer into the footwell and cockpit from the engine compartment, but this design had its advantages for ease of maintenance and it also kept the passenger compartment reasonably warm from the heat generated by the engine. The tail of both the J1 and J2 was relatively short and stubby with the J2 only extended by the externally mounted 12 gallon slab tank and carrier mounted spare wheel. The J1 had a bulbous rear end with only a 6 gallon tank concealed behind the rear seat. A neat lockable hinged fuel flap was incorporated on the nearside rear corner of the car. Other differences on the J1 were the side shields faired into the cycle type front wings, giving greater protection from road dirt and water.

Power came from the well tried 847cc engine as used on the successful M type which was originally derived from the Wolseley Hornet. With an 8 port crossflow cylinder head and twin carburettors, this unit produced a healthy 36 bhp at 5,500 rpm, however as previously described with only a two main bearing crankshaft, revving the engine to its maximum, soon produced premature failure of the flimsy crankshaft. The vertically mounted dynamo was driven off the front end of the crankshaft, with its armature forming part of the overhead camshaft drive. This particular design was a weak point on these engines with the seals leaking oil onto the dynamo causing embarrassing flat batteries. The gearbox now sported four forward speeds unlike the earlier three speed gearboxes of the M and D types; it also had a neat remote control gearchange enclosed in an alloy casing, bringing the gear lever conveniently to the drivers hand. The top two ratios were close, giving a good high speed range, whilst first and second gears were sufficiently low for either trials work or the unexpected very steep hill, with a fair step between second and third gear. A single plate dry clutch transferred the power via a Hardy Spicer propshaft to the three quarter floating rear axle.

Later on in 1932 the J3 and J4 became available. The J3 being a supercharged version of the J2 and it had a 746cc version of the C type engine, in every other respect it was the same as the J2 but with superior performance if suitable sparking plugs were available! The J4 was the model Abingdon offered specifically for racing, this likewise was basically a J2 but with different steering gear and larger 12" drum brakes as found on the Magna. All the racing extras were evident such as quick fill caps on the radiator and fuel tank, leather bonnet straps, side exit fishtailed exhaust and with safety in mind no doors were fitted necessitating a leap over the side of the car to get into the driving seat. The J4 was a fast car with several runs of over 100 mph being recorded at Brooklands and there is no doubt that through continuous development of the J series from the J1 to the J4 that it captured the imagination of the sportscar enthusiast. Despite adverse criticism of fuel starvation problems on early J2s and the previously mentioned dynamo oil leaks problems, careful maintenance gave good reliable service and the cars were in fact able to withstand far more hard use than any other comparable competitor at the time.